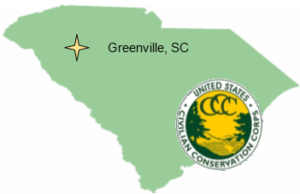 On Thursday, Sept. 14, we traveled to Greenville, SC to meet with our fellow members of CCC Legacy. For many of the members it was our first time to visit South Carolina, and we were looking forward to it.  Greenville turned out to be a growing city set in gently rolling countryside of northwest of the state.

The first event of the Gathering was registration and the welcome reception.   At the reception that evening we met our host and CCC Legacy Board Member, Daniel Newquist and former member of AmeriCorps, a reincarnation of the original CCC. The reception turned into “old home week” as we met old friends and made new ones. There were 27 of us, and even though we were few in number, we made up for it in enthusiasm. We were glad to have two of our regular CCC Boys in attendance, namely Walter Atwood and Hank Sulima, both living in Florida now. We also met Philip Fravel, Ph.D. of Clemson University of South Carolina, also a CCC Legacy Life member, who helped to organize the event and proved to be an enthusiastic supporter of the CCC Legacy cause. We were very glad to renew friendships with CCC Legacy Board Members: President Joan Sharpe of Virginia, Vice-President Jean Martin also of Virginia {but soon Florida}, Secretary Naomi Shaw of Missouri, and Treasurer Tim Montgomery from California.

Each attendee introduced themselves and shared “what was on their mind”. Fun and interesting reminiscences brought us all together focused on the history of the CCC.  Authors had a change to tell us about their work.

We also had a chance to “hoop it up a little” during the traditional raffle of items of interest.  This year we had a special  item donated by member John Eastlake form Williamsport, PA.   It was definitely the prize of the evening and was a signed print won by a most appreciative Marty Podskoch.

The print was painted by Nick Rosata, a Ralston, PA native, who was a CCC Boy at the S-103 Laquin Camp and the S-15 Elimsport Camp.  During his CCC service, he did the artwork for the camp newspapers.   After the CCC and Navy he went to work for the “Williamsport Grit” where he was an artist.  He left the Grit and started his own art business.  Nick produced 29 covers for the Pennsylvania Game News spanning 55 years.  The Pennsylvania Game Commission Conservation Officers would submit various articles and Nick would make a cartoon for each of them.

Friday morning, Sept. 15, after our breakfast at our hotel, promptly at 8:AM (give or take a few minutes) we boarded our bus to head for our first destination, Oconee State Park. Oconee ( an Indian word for “Land by the Waters”), is one of the 16 CCC built state parks in South Carolina. Indeed, these 16 parks were the original state parks in the state, so the people of the state are justifiably thankful to the CCC for them.

It was a beautiful sun-lite morning as we got off the bus at the CCC built Park Visitor Center and gathered around the pedestal of a CCC Worker Statue, the 12th in the nation, in front of the Center. The sunlight on the statue was like a spotlight on it as our host Dan Newquist introduced the chief Park Ranger, JoAnna White and she told of what Oconee State Park has to offer, and then introduced Al Hester, Historic Sites Coordinator for South Carolina State Park System. Al told of some of the history of the site, and then guided us around the lake there with its CCC built bath house, numerous cabins, and a water wheel. By then we had worked up an appetite so we broke for our box lunches that we had picked up enroute provided by our host Dan. We were off to a good start.

Our second stop had originally planned to be at the Walhalla Fish Hatchery built by the CCC, but Hurricane Irma beat us to it by about a week. The structures survived OK, but limbs and debris had blocked roads and some power lines were still down.

It was on to Table Rock State Park, and we would have more time to see and enjoy it. The park was actually still closed to the public to finish allowing crews to clean up, but we got permission, and saw that the park was now in fine shape.  Park Ranger Poll Knowland  gave us a tour of the CCC built cabins and lodge.  He shared that in 2007 the South Carolina State Parks completed the restoration of the CCC cabin village and the Table Rock Lodge that won a preservation award for the work.

After the cabin tour, we proceeded to the beautiful Table Rock Lodge.  Sitting on the upper deck of the lodge looking at the mountains, Ranger Poll told of the CCC history and community heritage of the lodge.

Our afternoon presentation was given by Rachel Price of the Palmetto Conservation Foundation on the 425 mile Palmetto Trail System that had recently been completed which runs diagonally from the southeast coastal plain up to the Blue Ridge mountains in the northwest corner of the state. The AmeriCorps did a lot of the work. It is one of only 16 cross-state trails in the U.S., and was designed to be enjoyed in segments easily available to anyone, with back country trails, city bikeways, mountain treks, and everything in between; including Revolutionary War battlefields.

That evening we had our catered meal outside on the stone deck of the veranda of Table Rock Lodge. The young man that was the caterer provided a really great meal for us, all thanks to our host Dan Newquist. The late afternoon was perfect with the still waters of the lake below us, tall trees all around, and the sunlit mountains arrayed before us. We felt very privileged.
.
When we got back to our hotel that evening, we were tired but very pleased with the things we saw.

Saturday morning saw us up and about, and ready to hit the road for our next adventure. Our destination was Paris Mountain State Park, which proved to be a much shorter drive from Greenville. We soon arrived at Paris Mountain Visitor Center where we viewed the exhibits, and got a look at Lake Placid just below the Center. It is a beautiful small lake surrounded by a forest of tall trees and complete with surrounding high mountains.

After a bit, we boarded our bus again and headed up to the northern part of the park to Camp Buckhorn. “Up” was the operative word here because we went round and around a twisting, narrow road enclosed by high trees glimpsing views of the mountains. You would have thought you were in Colorado. We enjoyed the views and toured several of the recently beautifully restored CCC cabins. They looked very inviting. We had our catered lunch at the CCC built lodge at Camp Buckhorn.

After lunch went back down the mountain to Lake Placid where we were invited to take a short hike to the CCC built outdoor amphitheater to hear a “Music in the Woods Program” by some blue-grass musicians. The amphitheater was an impressive stone structure built in an arc nestled into a gradual hillside. Several of us finished the hike by going all the way around the small lake.   After our exercise we bussed back up to the Camp Buckhorn Lodge

The Annual CCC Legacy Membership Meeting was held after our return.  It recapped the yearly activities of the organization.

The Awards Dinner was next on the agenda.  Our quest speaker for the evening was  Nashville based historian Tara Mitchell Mielnik on her book, “New Deal, New Landscape, The Civilian Conservation Corps and South Carolina’s State Parks.”  She really knew her stuff and her talk was fascinating. It was in her talk that we heard her use the term “Parkitecture” several times to describe the designs for CCC park structures that originated in the National Park Service. When you think about it, it perfectly fits in describing the work of the CCC and its influence on the country’s parks.  Thanks to Tara for sharing her research.

The final portion of the event was awards and recognition.  This year recipients of the Legacy Achievement Award were chosen for their lifetime achievement in promoting and supporting the heritage of the Civilian Conservation Corps.  Three CCC alumni who have served continuously from the time they were NACCCA members were recognized.  They were Walter Atwood, FL; Philip Gouzie, ME; and Henry Sulima, FL.   Bill Jamerson and the West Virginia CCC State Museum Association were recognized for their contributions to Education.

After the awards were given, the cameras stopped flashing, and the visiting was over this capped off our memorable 2017 CCC Annual Gathering.  Back on the bus for the downhill ride back to Greenville