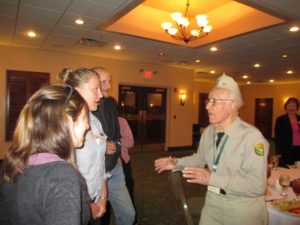 "Celebrating the 80th Anniversary of the CCC"

Welcome to the 2013 Annual Gathering

The 2013 CCC Legacy Gathering in Tucson, AZ, included an important announcement regarding the future of the many Youth Corps in the country at the opening reception on Thursday, October 24.  Following welcoming statements from our President, Joan Sharpe, and our co-hosts from the Southwestern Conservation Corps (SCC), Rob Spath (Executive Director) and Harry Bruell (CEO & President), we heard from the Mayor of Tucson, Jonathan Rothschild, who related his connection with the CCC and its importance to the city of Tucson.  John Kelly, Deputy Chief of Staff of the Corporation for National and Community Service, then hinted of an important pending announcement as he spoke about current efforts by the nearly130 Corps Network groups working throughout the country which was underscored by the presence of the many AmeriCorps and SCC workers who attended the reception.  Finally, Robert Bonnie, Under Secretary of the US Dept. of Agriculture, delivered the news: the 21st Century Conservation Corps (21CSC), an organization established through the US Dept. of Interior’s America’s Great Outdoors initiative and what many are calling the CCC of the future, announced that 91 organizations throughout the US had been selected as members to pursue its goal “to engage citizens in hands-on service and job training experiences on public lands, waterways, cultural heritage sites, and community green spaces”.  Joan Sharpe later observed that this was “big news” and something that bodes very well for continuing the legacy established by the Civilian Conservation Corps.

With such big news to start out with, it would be easy to predict the remainder of the Gathering would be tame in comparison.  But such was not the case.  Outstanding presentations were the rule on Friday as Gathering participants heard from several authors on the impact of the CCC in Arizona, learned how the current Corps Network is helping with natural resource management, and heard from current and recent Corps members on the value of their Corps experiences on their lives.  It was extremely impressive and gratifying to hear how the legacy of the CCC was alive and well in the form of these young people during this latter session.   Gathering participants were also amused to hear that an early motto of the Youth Conservation Corps was “work like dogs, eat like hogs and sleep like logs” as told by current Saguaro National Park Superintendent and former YCC member, Darla Sidles.

A presentation by Robert Audretsch on the CCC’s rescue work following the blizzards of 1936-1937 was given which highlighted how varied and harrowing the work of the CCC could be.  The afternoon session ended with an author’s panel and book signing session with CCC chroniclers Robert Audretsch, Ken Baldrige, Ren and Helen Davis, Sharon Hunt, Robert Moore and Kathy Mays Smith.  During this session, Tim Montgomery also showed how the recently digitized NACCCA Journals could be viewed and searched for any keyword imaginable.  A buffet dinner accompanied by an excellent presentation on the “Legacy of the CCC in America’s Parks” by Ren and Helen Davis concluded the day’s event.

Saturday was the official field trip day of the Gathering as participants were bused to the Arizona-Sonora Desert Museum.  Our able guide, CCC Legacy member Philip Brown, gave an overview of the museum with particular attention to the museum’s use of two CCC-built adobe buildings when it was founded in the 1950’s.  Participants were then given free time to explore the wide variety of offerings of the museum ranging from minerals displays to extensive cactus gardens to snake and reptile vivariums.  A photo op for the local television station followed with our CCC Boys and local congressman, Raul M. Grijalva, whose father-in-law was in the CCC.  Representative Grijalva made a short speech emphasizing how the legacy of the CCC was an important inheritance of the following generations and then a larger photo op happened as a large group picture was taken including the remaining CCC Legacy participants and a good number of our SCC co-hosts who had just finished a community work project at the museum.

We headed back to Tucson after a very nice lunch provided by the SCC and sponsored by REI.  (Thanks for the souvenir metal water bottles!  No more BPA for us!)  The business end of the Gathering began when we returned as the annual membership meeting was called to order back at the Riverpark Inn.  (Details of the membership meeting will be described separately in the meeting minutes.)  It was then “Story Time” where our CCC Boys reflected on their experiences in the CCC and the years that followed.  The formal conclusion of the Gathering was marked by a banquet that featured Dr. Anthony DiFranco who showed his recently completed film, “Dollar a Day Boys: Remembering the Civilian Conservation Corps”.  This film is an interesting reflection on the CCC intertwined with the story of his father and his love affair with sweetheart (and Dr. DiFranco’s eventual mother).

For those of us who can’t get enough of the CCC, the optional Sunday historic bus tour took participants to the western unit of Saguaro National Park.  CCC Legacy member, Philip Brown (this time wearing his National Park Service hat), gave an interesting presentation on the CCC’s work in Saguaro National Park.  The group then traveled to the Sus picnic area that had been originally built by the CCC and included picnic tables, picnic grills, toilets and a check dam nearby.  Following lunch using the CCC-built picnic tables, the group traveled to the site of Camp Pima (SP-7-A), one of two camps employed to develop the then “Tucson Mountains County Park”.  Philip Brown gave an excellent tour of the site that included various remains of the bath houses, water tower, truck sheds and several mystery buildings.

Overall, this year’s Gathering was an overwhelming success which involved the participation of 35 CCC Legacy members including 10 CCC Boys.  It also was an important event to link with CCC’s Legacy’s organizations of the future: The Corps Network, Southwest Conservation Corps and other AmeriCorps affiliates, and the 21st Century Conservation Service Corps.  Many thanks go to Gathering coordinator and CCC Legacy Vice President John Irish, CCC Legacy Chapter 44 President Michael Smith and CCC Legacy President Joan Sharpe for their work in making this year’s Gathering so educational and enjoyable.  We are also indebted to SCC for their contributions in co-hosting.  We thank them not only for the food and beverages they provided but also for the top-flight speakers they helped line up for the event.